Zuerifaescht 2013 – Zurich in a state of exception

What do 2 million people, 388 electric vehicles and a parachutist have in common? 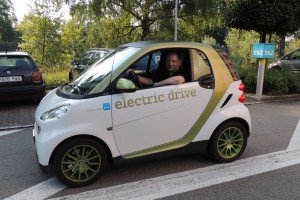 They were all part of Switzerland’s largest festival in the city center of Zurich on the first weekend of July in 2013. An event that had secured a place on the list of “hot locations candidates” for Project Black Hungarian in advance. A huge party at the lake and places between ancient buildings in downtown Zurich? A world record attempt with hundreds of vehicles along the lake promenade? That promised to provide some special scenes for the spy novel. Our expectations were not disappointed! We returned the favor with two chapters dedicated to events that occurred during the festival. On the morning of July 6th, 388 electric vehicles lined up at Utoquai to set up the worldwide record for the longest electric vehicle parade. The excited participants radiated as brightly as the sun. From eight in the morning onwards and after running several obstacle courses caused by numerous roadblocks around the festival area, a colorful hodgepodge of electric vehicles joined the participants of the WAVE Trophy. Among them was the largest gathering of Tesla vehicles with over fifty Roadster and two, at that time still rare, Model S. The Tesla Club Austria and their Deputy Chairman, who was riding along the rallye again as last year’s winner, had mobilized their members. And for the STOC, the Swiss Tesla Owners Club, whose president had also visited the WAVE the night before in Baden, it was a home run. Several dozen Mitsubishi iMiev and electric Smart models from the fleet of the two energy suppliers as well as other series vehicles like the Nissan Leaf or Renault Zoe mingled with a bunch of smile-cracking SAMs, nimble Segways and hybrid vehicles like Twikes and Amperas. 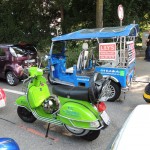 Thrown in was the odd exotic vehicle like the most expensive electric car in the world – the Concept One made by Rimac in Croatioa, three-wheeled TucTucs, motorcycles like the Johammer (back then known as Biiista), scooters and conversions of a Porsche or Volkswagen Bulli. The taillight of the crowd was an all-electric T5 towing an electric speedboat which should be granted a special role in the book, alas at another location that resembled its habitat.

The world record attempt turned out to be a dramatic undertaking, because the requirements for being recorded in the Guinness Book were strict. The parade and each of its vehicles had to be filmed from different angles to make the attempt bullet-proof. The concourse could not be allowed to be torn apart (read: few meters distance between participants) or screwed up by other (stinking) cars, screwing themselves in. Three factors seemed to jeopardize the attempt before it even began. First, the tram that crossed the parade in 90-second intervals and had absolute priority. Secondly, an unexpected construction site, which formed an additional bottleneck right before the turnaround section half-way through the route. Thirdly, several delivery vehicles that were in a hurry to replenish the supplies of the festival stands along the lake front and whose drivers had little sympathy in stock.

Shortly after ten o’clock everybody was fired up including the starting pistol and the parade began to move. Sultry heat spread under the scarcely clouded sky. Car after car crept along the route. Occasionally, impatient folks neither propelled electrically nor particularly appreciative of the cause of action ignored the barricades and squeezed into the gaps caused by the crossing tram. An ever increasing number of visitors who strolled along the sidewalks, scurried through the vehicles from one side of the road to the other to watch the parachutists approach and land on the army boats. The WAVE Trophy organizer ran along the route soaked in sweat and railing on the phone. Again and again he had to push away stalls and obstacles to make way for the vehicles of his parade. After all a world record had to be set.

Until the last minute, it was unclear whether only all-electric vehicles would be counted or if it was all-in including their hybrid cousins. Therefore, Twike and Ampera groups had lined up at the end of the parade to make math easier. In the end only the battery-electric vehicles counted. Luckily there were 305 and in spite of all the adversities the world record was set.

These are the facts. 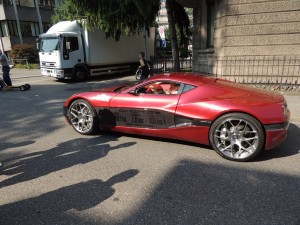 But what about the nine-year old Florian, who participated in the WAVE Trophy? Did he actually disappear during the world record attempt? Was he even kidnapped by force? If such a sinister thought would have come to mind to someone, what role would the at that time most expensive and fastest electric car in the world – the Concept One – have played? With the prevailing chaos – a newspaper even referred to it as the largest electric vehicle traffic jam – the choice of location for such a stunt would not have come as a surprise. 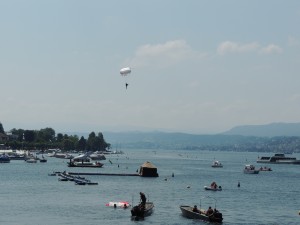 Did a particular parachutist of the show group who landed – unnoticed by many drivers during the electric car parade – very close to the lake follow separate goals on his own? Was there really an involuntary drug victim among the millions of party animals who was admitted to a mental health institution that weekend? Granted, cleaning up after the party and, given the heat, the attempt to quickly get rid of the smell of waste, alcohol and urine could have driven a sensitive soul crazy. 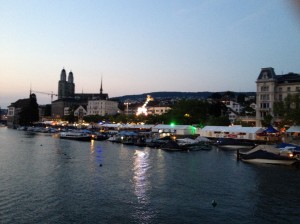 The truth is that, on that weekend, downtown Zurich doubled as Mecca for partygoers and offered entertainment en masse – culminating in fantastic fireworks, which guests of the Dolder Grand could certainly have enjoyed from their balconies. It is also true that due to high temperatures and large crowds the city ran the risk of a mass panic. Something that comes with major events like this one. Fortunately, there are new technologies such as “crowd sensing” which was applied by the DFKI (German Research Institute for Artificial Intelligence) in Zurich in 2013.

This approach monitors and evaluates the amount and density of cell phone signals in defined areas together with the movement of the respective crowd to foresee critical situations and immediately trigger appropriate action at the spot.

Embedded intelligence in service for the people.

And finally it should be mentioned that subjects from renowned Swiss lighting artist Gerry Hofstetter projected onto the Grossmuenster church in Zurich on the evening of July 7 in 2013 served as an inspiration for the designer of the book cover.