One of the first things to decide on when writing a novel is the narrative perspective.

During their author’s kick-off boot camp in September 2013, Niall and Alice decided on a third person perspective which is very common for fictional stories. 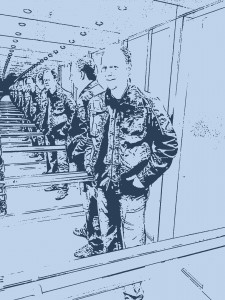 But they had a feeling that something was missing to make the grade. So, inspired by Gerhard, the publisher’s adviser, and by Alice’s experiences while taking part in WAVE 2013, it was not the vantage point of one single person but one of multiple characters they decided on.

The constant change in subjective perspective per chapter not only honors the fact that the same situation is perceived differently by different people but also provides an extra element of suspense.

The authors decided on a total of six viewpoint characters when they first started to map out the story. It seemed a good idea to have three characters on the villains’ and three on the good guys’ side.

However, things never turn out the way you expect them to, do they…

The first character with his own vantage point was decided on without missing a beat: the villain Dominik.

Get a sneak peak on Dominik’s vantage point…