by Thuna Dinh and Sabine Kennel

On the 25th of June, despite the hot temperature, more than 70 startup-enthusiasts gathered together at Google’s office in Munich for an even hotter topic: secrets of startup investors.

The second Diversity Native Speakers Night started with a fireside chat with only kick-ass women: Mila Cramer, Investment Manager at Project A, Daria Saharova, Partner at Vito One, and Britta Muzyk-Tikovsky, Founder of Capscovil and Diversity Natives.

In the introduction, we learned that in addition to the industry sector the startup is in, the maturity of the startup and their idea play also a role when applying for funding: different types of Venture Capital firms (VCs) finance startups at different stages.

Early stage to series A

While Project A invests mainly in seed and series-A stage startups in the digital space and has done so for 45 startups up to date, Vito One may enter even earlier and has invested in 20 startups in the PropTech industry so far. 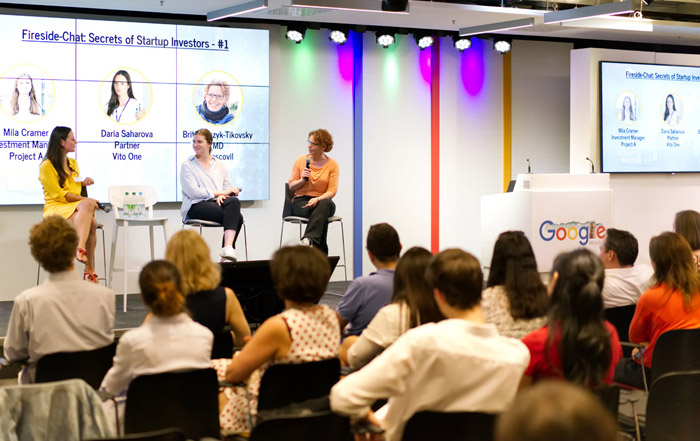 As the discussion evolved moderator Britta Muzyk-Tikovsky, a passionate advocate for diversity with all of its facets, added another aspect to the until then purely money focused discussion: the diversity potential among founders.

The “founding business” is de facto a game played between men mostly, a classical male domain so to say. Members of minority groups and women are once again underrepresented in that field. With a lack of role models and reportedly still less woman graduating from science and tech related fields, the percentage of female founders is kept in check at a fairly low rate.

The modern investment market is mainly dominated by technological innovations, which is often a barrier for women to enter, so Mila. Additionally, innovations around female-centric topics are often less relatable to many male investors. Even though having been around in the financial industry for some time, Daria experienced herself, how male colleagues turned her “fine pantyhose” business model down, stating that “stockings are unsexy” as using their opinion as a valid justification to not invest despite her solid business model.

In Daria’s observation, men are judged by their potential, while woman are judged by their past performances. And as women tend to be more conservative and less confident during negotiations than men, it’s no surprise that of those already few female founders a good portion eventually left the business, Daria concluded.

A chance for diversity

Setting the current unilateral representation apart, there is one central advantage for increasing diversity in startups and the investment field: it’s not any of the diversity aspects, it’s the idea that matters. The two investors agreed that the business model and its potential are the most critical aspects. Their decision as investor is independent from any gender and ethnical aspects, they assured the audience.

A field where there is room for improvement is at the leadership level of VCs. At Project A there’s five partners and an all of them are male. However, they try to compensate this bias by including people from different internal groups into discussions.

Mila and Daria finally shared their secret recipe to successfully pitch to an investor: next to a solid business case, early “customer” opinion is very useful. On the one hand, people can start validating the business model and on the other hand, opinion and feedback of others can help to figure out how to make the right impression.

Founders should listen to the granular differences in their environment. When in meeting with a VC, be clear, be precise and pitch yourself big but truthfully.
The cherries on the cake are, for instance, mixed and diverse teams as it’s a known fact that those perform better. Wrapping up the fireside chat, both Mila and Daria recommend that founders research extensively which VC they would like to get onboard.

It’s not only the VC who is stuck with the founders in the partnership but also vice versa. Finding a VC with corresponding visions and values is the secret to a long-lasting successful relationship, they say.

Series A and later stages 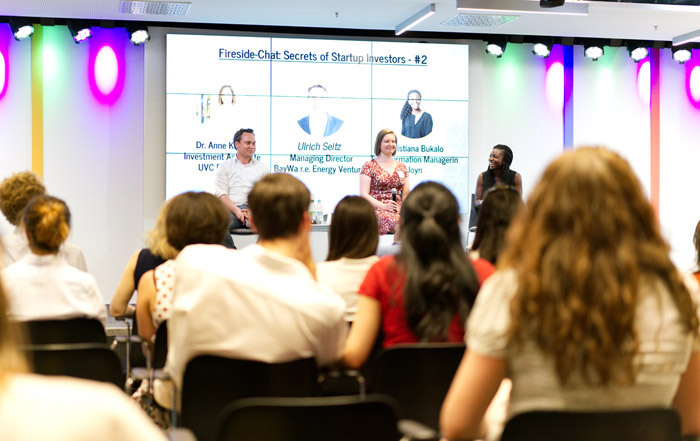 The second fireside chat was hosted by Christiana Bukalo, Transformation Manager Corporate Development at Joyn. Together with her panelists Dr. Anne Kreile, Investment Associate at Unternehmertum Venture Capital (UVC) Partners, and Ulrich Seitz, Managing Director at BayWa r.e. Energy Ventures they continued to shared their tips when investing: as both VCs make later stage investments – with a focus on technology and energy/e-mobility-related respectively, the focus on the idea is even more important.

It’s all about the market fit of the product and proof of market viability, Ulrich said. His most important factors for investment decisions are revenue potential and defendable barriers to prevent competitors from market entry. Ideally, they are looking at a growth potential of 10x (how fitting, that the Speakers Night was held at Google’s 10x space in Munich). However, a flexible team that brings complementary skills to the table should not be undervalued.

Diversity in the team

“A sales guy in the team is not a necessity but is highly appreciated. Our business works, because we invest relatively early to sell it later at a much higher price. We face risks daily, therefore, when the right sales person is involved this can make a difference.”, Ulrich explained. According to the Managing Director a strong sales guy will bring experience, his network and contacts, and should be able to open the right door fast.

Surprisingly, outgoingness is, in his opinion, not a must. As there’s a lot of focus on female founders in the market, he also looks at startups founded by women as this might help a lot with marketing the startup. But again, here the idea and execution are important and not the gender.

In accordance with the first fireside chat, Anne confirmed that at UVC diversity is not a deciding factor to invest in startups. “We acknowledge that the topic diversity is coming up short in our business and therefore we are using the ecosystem of UnternehmerTUM to address this.” UVC has been actively supporting initiatives, “Women.Start.Up” by UnternehmerTUM among others, that are dedicated to providing support to potential female founders with workshops, insights and networks.

In addition, employees at UVC receive diversity training. Although at BayWa r.e. Energy Ventures, diversity is not officially on the agenda, they still tackle the topic internally: adding diversity to a discussion and into the process is what diversity is about, according to Ulrich. “Diversity in what and how team members think makes it complete”, he adds.

He went on sharing the successful story of BL!XT founder Charlotta Holmquist, Fem Entrepreneur of the Year 2019 and a mother of three. BL!XT is her 6th successful startup. For BayWa r.e. Energy Ventures it was strongly positive, that Charlotta had not only lots of experience but could handle both, her kids and all her businesses.

Closing the session, Anne and Ulrich recommended to be confident regarding the goal and market size when pitching to investors. Especially women should not downsize their ideas or their own potential. Defendable arguments and solid calculation should be prepared diligently prior to the meeting. But – lying is a complete no-go.

Closing the Night, Britta Muzyk-Tikovsky invited all speakers to a panel discussion to set realistic expectations. Founders should be aware that VCs are active partners, which means that they will not only require seats in the advisory board but also a certain amount of face-to-face time to make sure the founder-VC-tandem is a good fit for everybody. 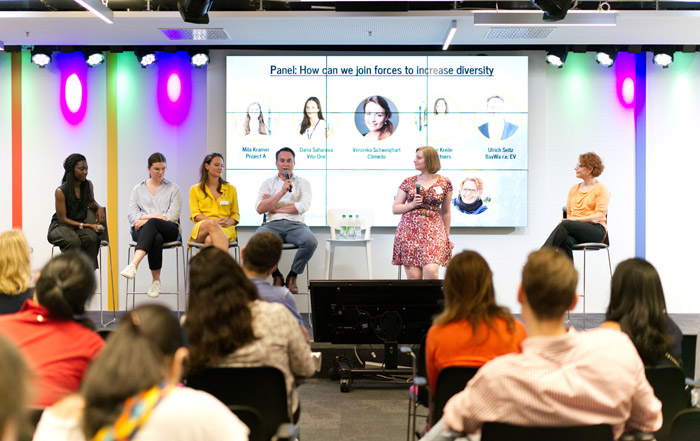 While Project A and UVC assist with operational support, Vito One and BayWa r.e. Energy Ventures act more like a sparring partner, providing access to networks, potential partners and clients, and talents. Then all speakers were available for audience questions.

One member of the audience wanted to know what the difference between VCs in Germany and Europe compared to other countries are: the processes are mainly the same. However, it seems, that in Europe the early feedback of the market and the business model of the startups are even more important than in the US. There’s also a higher attention to potential conflict here than elsewhere.

Everybody followed suit to Daria’s statement that Europe is a fantastic breeding ground when it comes to the startup/VC tandem. So as a German or European startup who’s looking for VCs you don’t need to reach all the way across the pond.

VC as the only solution?

Yet, if you are a founder or have an idea and are not good at presenting your startup this could be a major obstacle. Because the VC will doubt that you will be able to sell your product to the market if you can’t even sell yourself to the VC. Practicing your pitch diligently in front of family and friends and being authentic may help you in this case.

Ulrich also brought up an important point in this discussion: not for every startup – no matter what stage – a VC is the only solution. So, look for alternatives. However, if you want to get a VC on board there’s one point that all panelists agreed on: controlling and regular reporting are a major part of the deal. 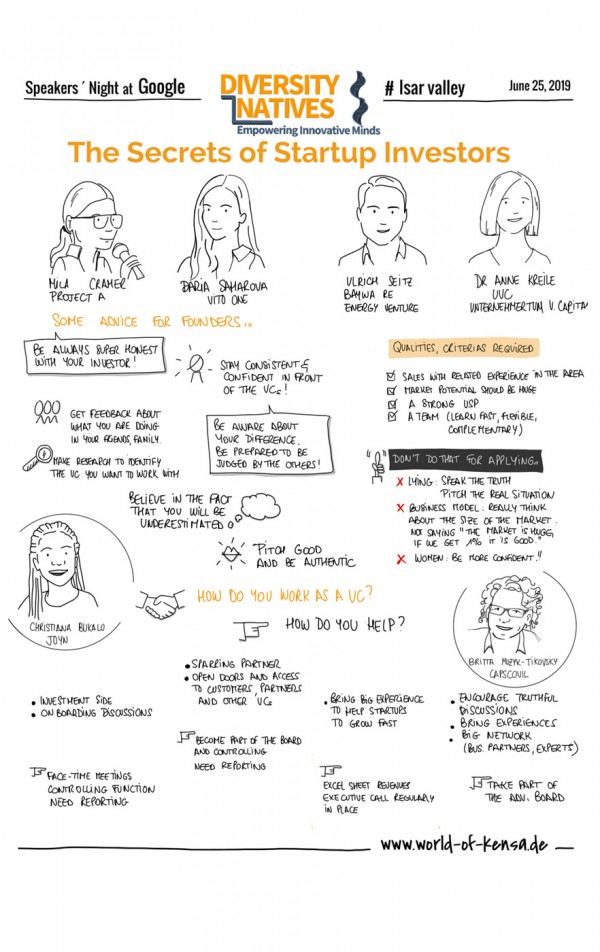 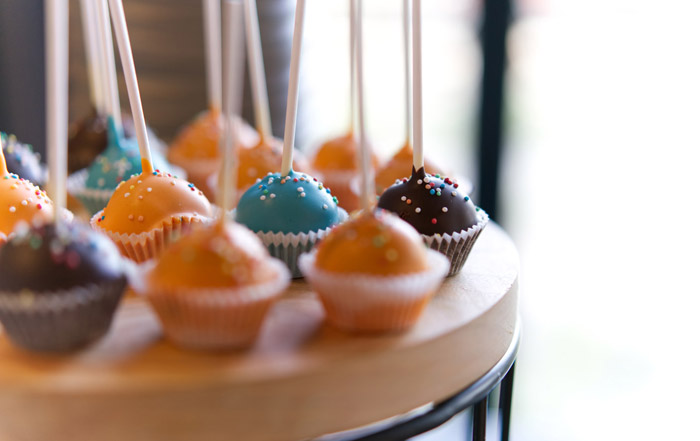 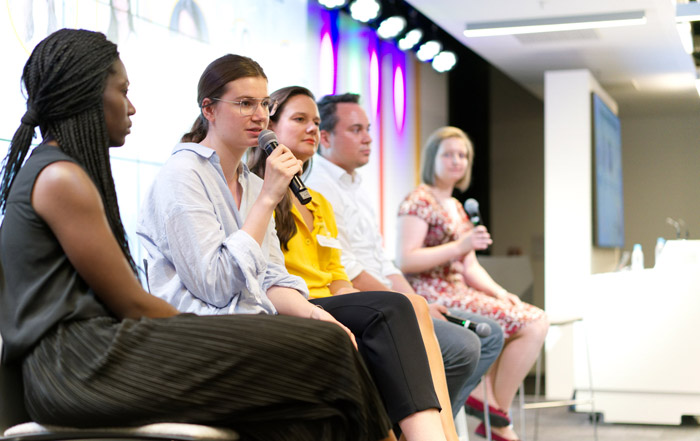 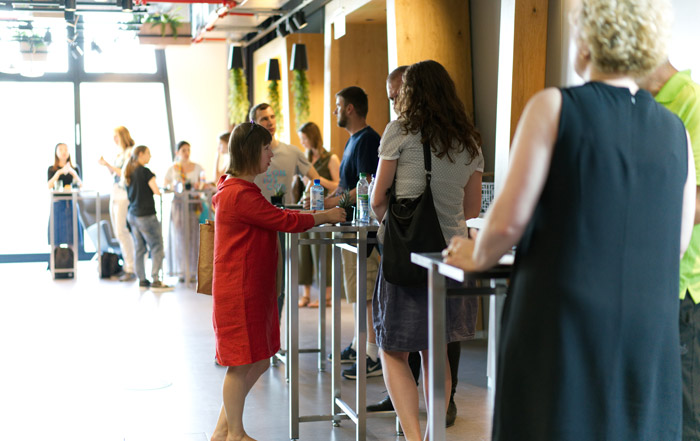 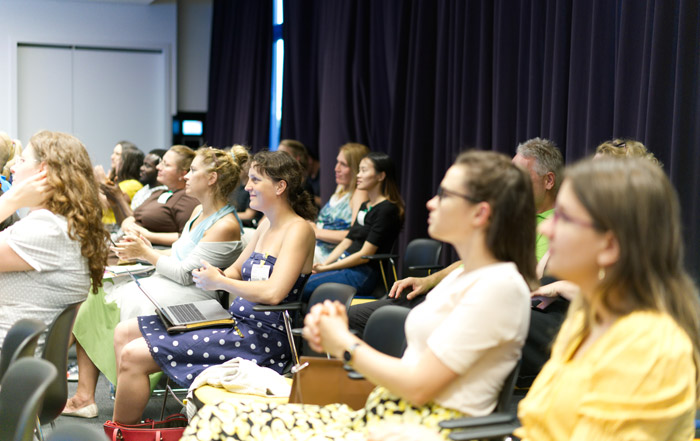 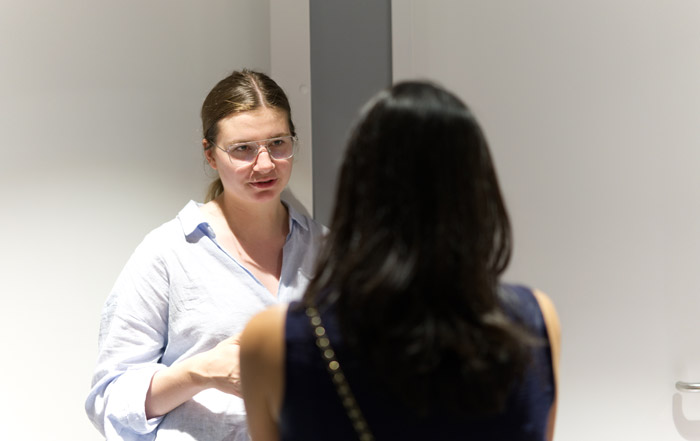 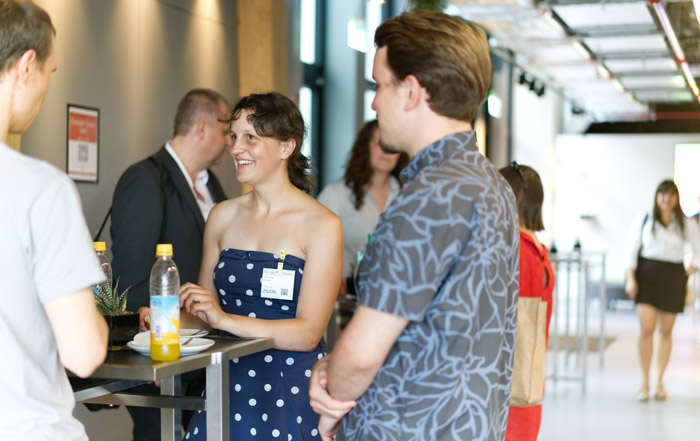 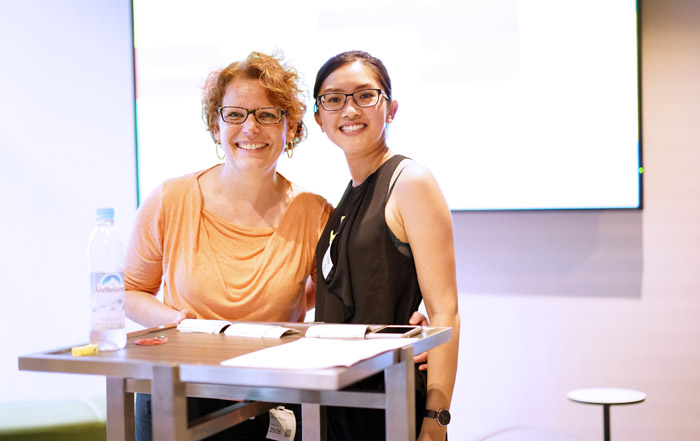 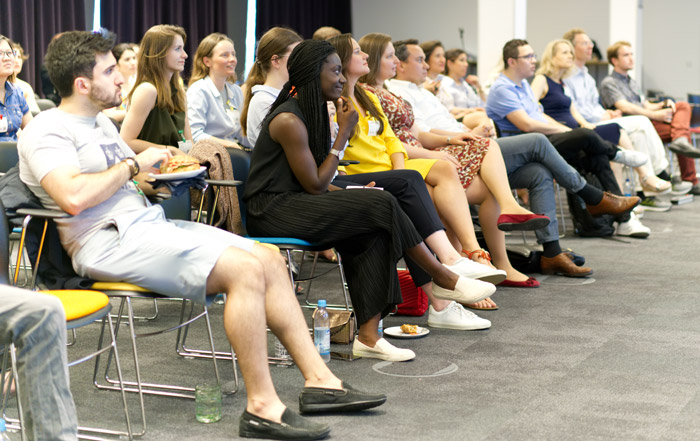 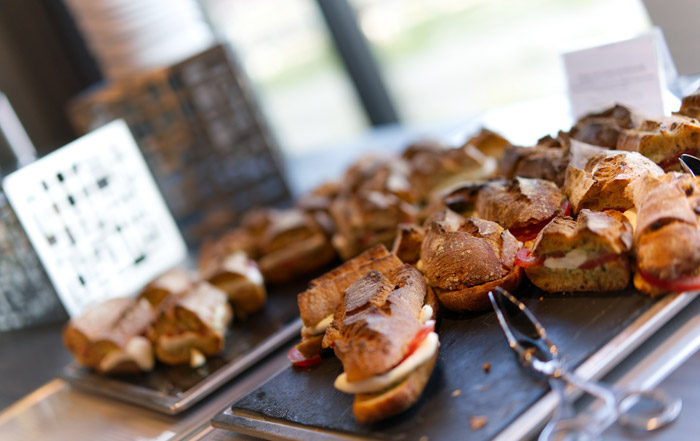 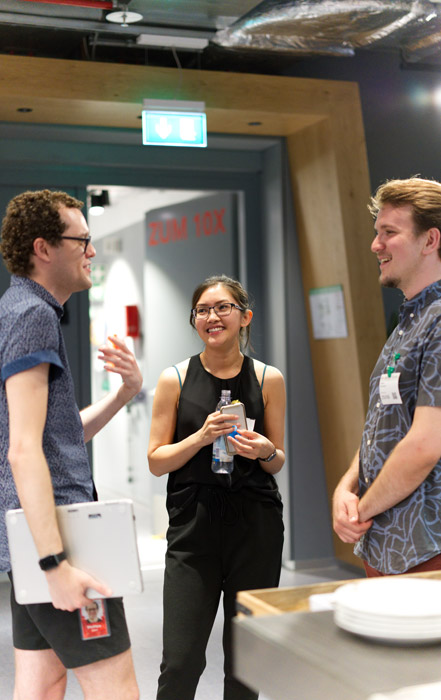 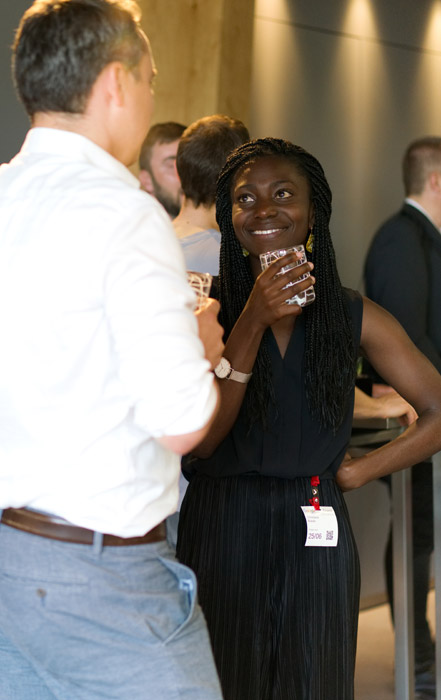 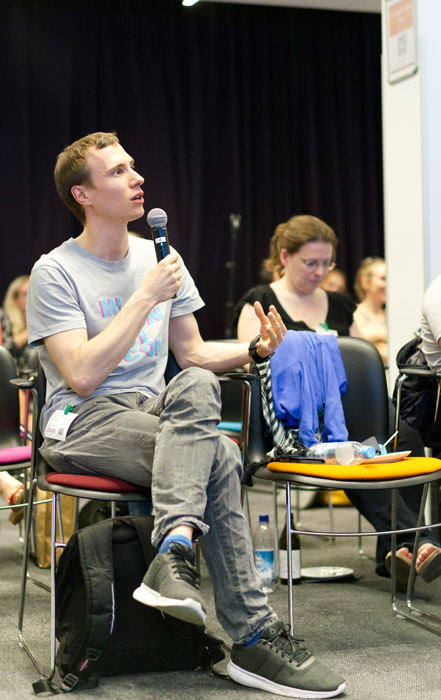 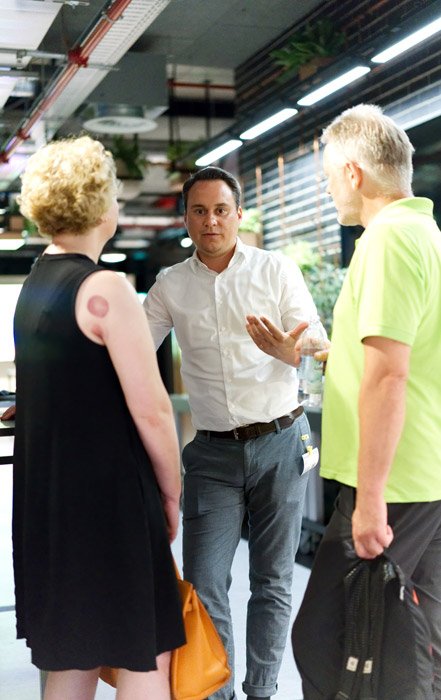 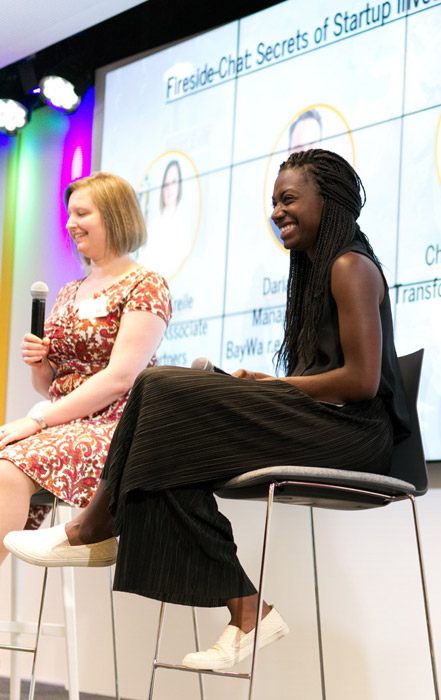 Diversity Natives is an initiative by Capscovil’s founder Britta Muzyk-Tikovsky with the goal to foster innovation by embracing diversity and inclusion in technology and business. For more information on how to get involved as a business, sponsor, ambassador, or community member, visit the website or send us an email. 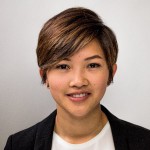 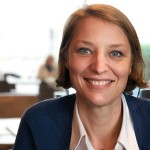