Learn to code while helping others! That is the goal that COOK and CODE initiator Alexander Hoffmann has set for his Social Hackathon series. The inaugural event on Saturday, January 23rd, at location partner Mantro in Munich was living proof of the concept.

Some 30 heart-and-soul coders gathered at the lofty office of Mantro on Saturday morning to assist three local social initiatives in their IT needs. Among the zealous crowd were expert mentors to guide those willing to learn and help.

At the end of the day, Breakout – a donation marathon project – had a tool that will follow their route on Google maps and show the achieved donations at the individual locations during the project set to start early in spring . Münchner Machbarn were perfectly happy as the team managed to curate and build a website compiled of more then 750+ social projects in Munich and has probably the largest collection of NPOs and social businesses based in Munich as of now.

The third project that supports orphans and children affected by HIV in Kenia saw its rebirth. The Baobab Family Project will soon be revamped with a mobile-ready and fully responsive theme.

Capscovil was happy to support in another way and fuel the hungry crowd with level-heated vegetarian stews, curry breads and homemade spice-infused drinks. The result got honored with some special attention of a food photographer from Kalacolumn Food Art 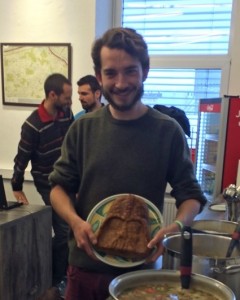 Saturday proved that the event series is off to a great start.

The next social hackathon is already scheduled for February 27th – again at the Mantro office in Munich . The sign-up for coders or coders-to-be is open already. Just drop Alex an email news@cookandcode.org or sign up via Eventbrite.

You lead a social project and seek support? Alex is happy to hear from you. All news and other events can be found on Facebook.

May the force be with COOK and CODE!