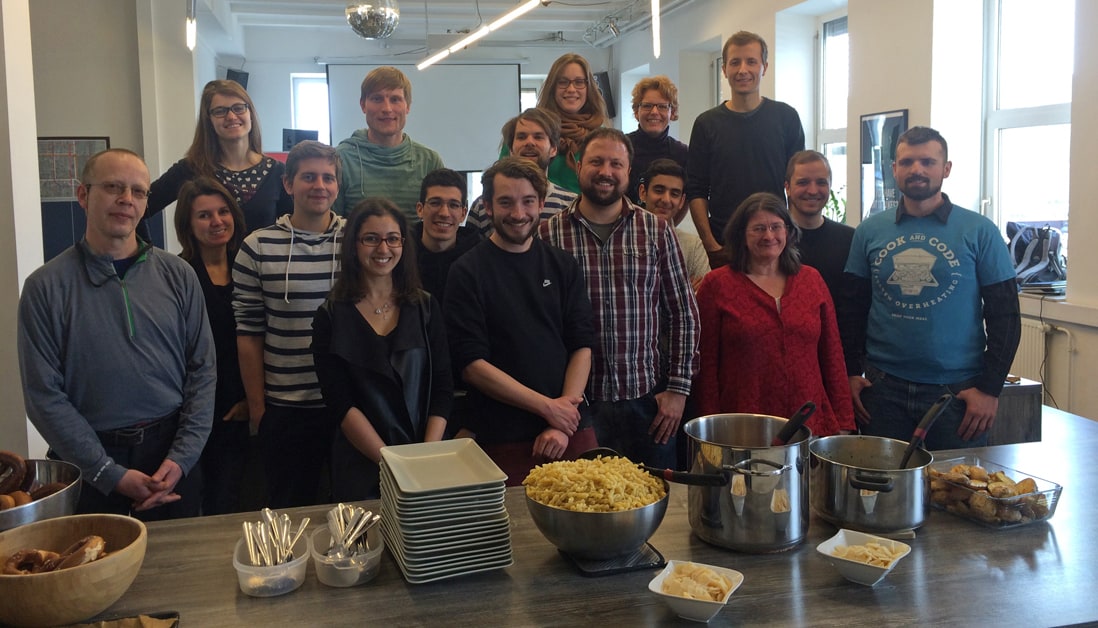 The second edition of the Social Hackathon, organized by COOK and CODE founder Alexander Hoffmann, took place on Saturday, February 27th, again at location partner Mantro in Munich. More than a dozen heart-and-soul coders wanted to code while helping others!

The goal this day was twofold.

On one side, there was JoKaZu, a platform for bringing together refugees and companies seeking new employees. The initiative who sprung from „Erstmal Mensch“ needed assistance in setting up their website and integrating their Facebook events into an event calendar on the site. This proofed to be tricky as Facebook restricts the data and information that can be retrieved through the API. Several options were identified. The group’s experienced mentor was joined by a representative of refugees on rails.

That’s the spirit of the social hackathon!

On the other side, there was stART International e.V., whose mission is to stabilize children and adolescents traumatized by war or natural disasters. The organization’s internationally working teams are formed by therapists, educators and artists who spend their vacation volunteering in countries like Nepal, Libya, Haiti, Philippines, Ukraine or along the Turkish / Syrian border area

Since 2014, they have been supporting refugees in Germany, i.e. helping in refugee camps. Currently, they are working in various educational and integrational projects pooled under MARE NOSTRUM – creating future together in a global world. Their site needed a major overhaul as they felt it did not reflect the quality of their work anymore.

An issue that a lot of NGOs face. They rather invest money into their social work to help others than contracting professional IT guys to polish up their websites. Yet shiny websites increase the chance that more donors feel attracted.

To make a decision in such cases is enough to drive you up the wall. Good thing that there’s events like the Social Hackathon.

A great match for the team was their diligent mentor, an artist himself who strikes a chord with people not only as a programming pro but as a lead guitarist with his rock band Running Choke .

As all the programmers and mentors were busy as a beaver, Capscovil was happy to support not with Bits but with Italian bites.

Plans for the next Social Hackathon are under way.

If you’ve started to get an appetite for COOK and CODE or need support with your social initiative just drop Alex an email news@cookandcode.org.  All news and other events can be found on Facebook.